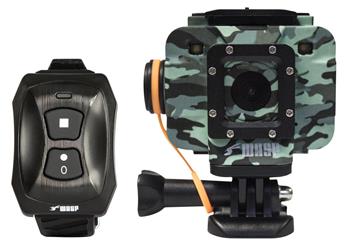 The ‘9906 CAMO’ is one of WASPcam’s newest camera models, with upgraded specs, and a few new features. The new WASPcam 9906 CAMO is specifically designed for outdoor activities with it’s camo pattern exterior, and allows users to turn off recording lights, shoot a video time-lapse and turn off all camera sounds. The included accessories are also tailored to the outdoors, with the Jaws Clamp Mount and Outdoor Utility Mount included in the package. The WASPcam 9906 CAMO Camera allows users to go from land to water without an extra waterproof case.

The 9906 CAMO records HD video up to 1440p30fps (and 1080p/60fps, 1080p/30fps, 720p/120fps, 720p/60fps, VGA/240fps), snaps still-images up to 16-megapixel (or 10-megapixel), and built-in Wi-Fi connects the camera to an iPhone or Android for live viewing, recording and sharing content online with friends and fans. The 9906 CAMO camera package also includes a wireless wrist remote, which is powered by Radio Frequency (RF). The Wireless Wrist Remote is capable of controlling video and photo recording up to 5 meters (15 feet) away. Where the 9906 CAMO really stands out from competitors is with the new features it brings to the table. The WASPcam 9906 CAMO is completely waterproof, down to 98 feet, without the addition of a waterproof case, and includes a 1.5-inch LCD viewing screen on the back of the camera. The WASPcam 9906 CAMO has loop recording and an auto looping function, which allows the camera to be used as a dash camera. Users can have their camera record in two-minute, five-minute, or 10 minute segments. Or turn off loop recording for continuous recording. The auto looping function allows the camera to record over older footage when the memory card is full. The 9906 CAMO also allows users to turn off all recording LED lights and camera noises, which is great for stealthy recording. The 9906 CAMO also includes a new Video Time-lapse feature, allowing users to shoot time-lapse videos at either 1, 3, 5, 10, 30, 60 second intervals.