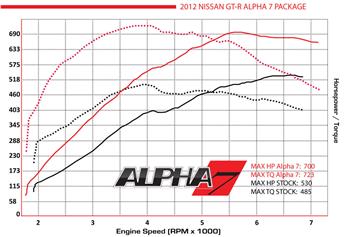 The Alpha 7 Package for the Nissan R35 GT-R is designed for those who want to maximize output of the stock turbochargers. We found some enthusiasts are not ready to step into an Alpha 9 Package just yet, but want more power than an Alpha 6. After many requests to build a package to maximize the potential of the stock turbos we have decided to make the Alpha 7 an official package in our line up.

Big Power Gains And A Wider Power Band… How Can You Beat That?
Nissan left a lot of power potential on the table when they designed the R35 GT-R. By freeing up exhaust flow with a properly tuned downpipe and exhaust system, increasing turbo efficiency with improved intakes and a larger intercooler and boosting fuel delivery, your GT-R’s potential is released. Couple that with improved cam timing characteristics and revised fueling maps inside the ECU and the Alpha 7 elevates your VR38’s output to 700HP and over 700TQ on 93 octane pump gas.

If that wasn’t enough, another benefit you receive is much sharper throttle response with quicker turbo spool than stock yielding an even wider power band. At 2500rpm the Alpha 7 is already putting out an additional 120HP and 270TQ over stock. Now that is a massive increase in power under the curve that will heighten your driving experience to a fever pitch!

Tame Street Manners Coupled With Big Power
At part throttle, the Alpha 7 behaves exactly like it did the day you drove it off the dealers lot thanks to the fine-tuned Alpha ECU calibration. Punch the throttle however and the asphalt shredding horsepower and torque makes you stand apart from the competition.

Alpha 7 Today, Alpha 9 in the Future
A unique benefit of the Alpha 7 is the potential for future power upgrades. For those who want to gear up for an Alpha 9, you can easily build on to this package at a later date if you choose without starting over again.