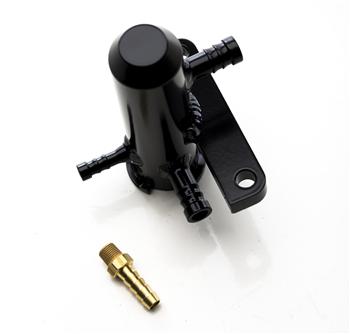 For guys running a rotated turbo setup the turbo inlet and/or inlet piping interferes with the ECFT. This means the tank either needs to be relocated or removed. While some have been successful in removing the ECFT, this is not the preferred method as its success is hit or miss at best. The other option is relocating the OEM tank to another location. Firewall, strut towers, and various other areas in the engine bay have been used via fabrication of brackets and other less glamorous methods. While this can work, the relocation requires longer lines that may themselves trap air if the routing is not well thought out, the final location may not be high enough to be as effective as the OEM location and it requires the additional use of fabrication tool and materials, which many of us do not have.

Back to the original point of the post, the thought of manufacturing a “Mini’ ECFT that would utilize the OEM high point location, mounting points, Subaru filler cap, and most importantly, provide clearance for the big rotated turbo setups. All while looking like it belonged there, not as an afterthought.